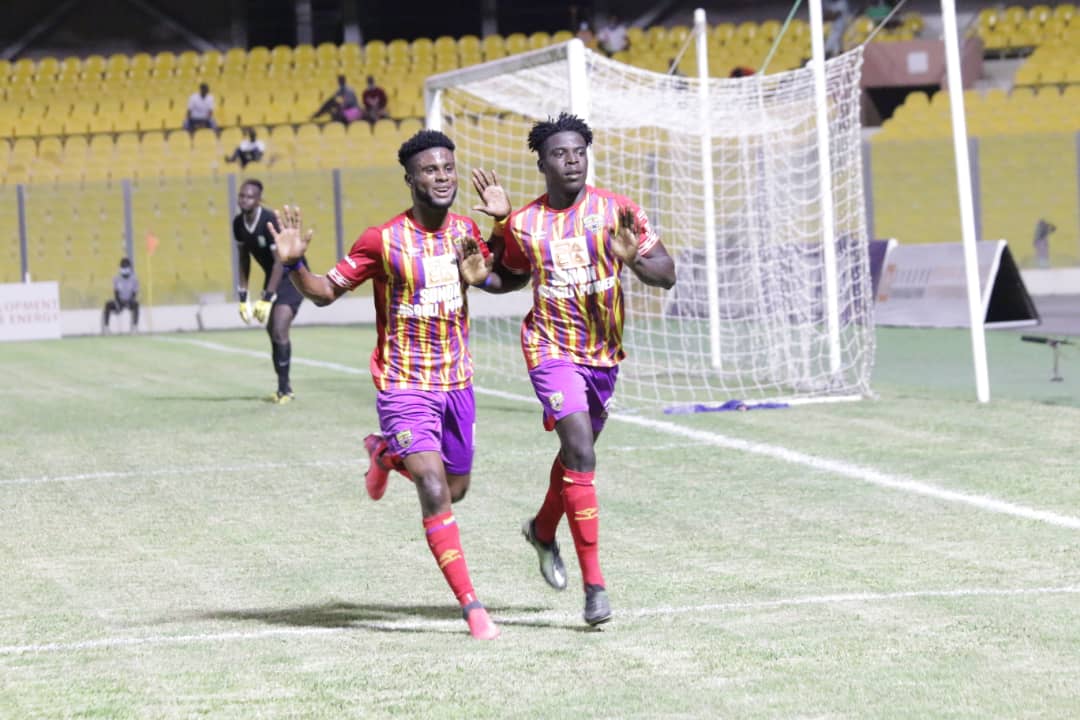 Isaac Mensah took advantage of a goalkeeping hauler to prod home the first goal in the 68th minute before Benjamin Afutu added the second, ten minutes from time.

Hearts of Oak are now two points behind Asante Kotoko who were held 1-1 by Liberty Professionals early on.

The Phobians had to recover from a first half penalty miss to pull off victory.

Victor Aidoo, for the second time in the season missed from the spot after Hearts were awarded a penalty in the 42nd minute.

Elmina Sharks defender Isaac Donkor handled a goal bound shot from Obeng Jnr and was red carded for the offense – giving the advantage to Hearts of Oak – but Sharks goalkeeper Lord Bawa Martey saved the kick as they kept a clean slate in the first half.

Back from recess, a horrendous kick by Sharks goalkeeper Lord Bawa Martey came off substitute Isaac Mensah to give Hearts the opener in the 68th minute.

Martey made a hush of a back pass from team mate Suraj Ibrahim.

Hearts of Oak kept pushing for the second and got rewarded in the 79th minute through Benjamin Afutu. The former Karela United man doubled the lead after heading home from close range.

Early on Sunday, leaders Asante Kotoko for the third successive time came from behind to draw 1-1 with Liberty Professionals at the Red Bull arena at Sogakope. The Scientific soccer lads scored the opener through Evans Owusu but defender Ismail Ganiyu headed home Ibrahim Moro’s free kick for the equalizer.

In Obuasi, AshantiGold SC clinched a 1-0 victory against Great Olympics at the Len Clay Stadium to return to winning ways. Midfielder Stephen Owusu Banahene converted from the spot in the 55th minute to give the miners all the spoils.

Aduana FC continued their impressive run after posting a 2-0 home win against Medeama SC at the Agyemang Badu I park at Dormaa. Diminutive winger Samuel Bioh and midfielder Sam Adams scored to ensure that the home side picked all the three points at home.

Karela United scored in either half to beat Eleven Wonders 2-0 at CAM Park in Ayinase. Diawusie Taylor drew the first blood inside 10 minutes before Bismark Oppong added the second three minutes after the break.

In Techiman, King Faisal registered their first home win in the second round as after defeating Bechem United 3-1. Zubairu Ibrahim continued his fine form with a quick fire brace in the first half. He opened the scoring in the 3rd minute and added the second five minutes later to give King Faisal a commanding lead – but he visitors reduced the tally through Steven Owusu to end the first half 2-1 in favour of King Faisal. Kwame Pepprah put the nail in the coffin with a late penalty to seal victory for Faisal.

Bottom placed Inter Allies thumped Berekum Chelsea 5-0 at the theatre of Dreams, Dawu. A quick fire brace by Alex Aso in the opening four minutes set the tone for Allies who held on to a 2-0 lead at the break. Richmond Lamptey extended the lead to 3-0 with a belter, before Samuel Armah and Nafiu Sulemana completed the rout. Despite the heavy win, Allies remain bottom of the table with 23 points after 25 League matches.

Earlier on Saturday, WAFA pip Legon Cities 1-0 at the Red Bull arena at Sogakope. Justus Torsutsey scored in the 33rd minute to give the Academy boys three points.